Serving the asset marketplace with deals, analysis and business opportunities. 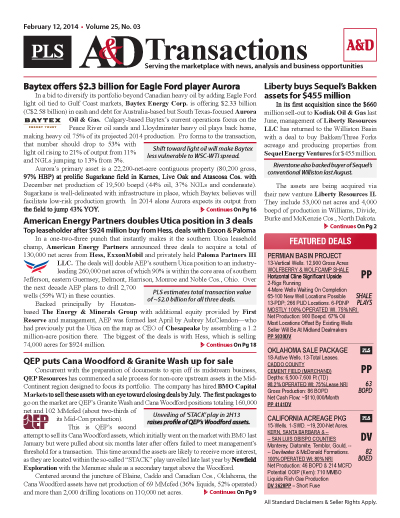 PLS publishes news and analysis on the acquisitions and divestitures (A&D) sector through its A&D module. The red banner report, published every 3 weeks, covers the active US asset marketplace and includes analysis of corporate mergers, property divestitures, completed transactions and deal metrics.

See what it is about before you buy. View a sample issue of A&D Transactions.

Opportunity is a reflection of information.
Call 713-650-1212 For More Information
Search A&D Transactions:

A&D - Superior’s US ops spinoff & merger with Forbes called of - June 2020
Superior Energy Services and Forbes Energy Services canceled their attempt to create a new US completions, production and water solutions firm, a casualty of declining crude prices. In addition to keeping Superior tied to the US land market, the collapse scuttles an attempt to whittle down $800 million in 7.125% senior notes maturing December 2021. The new company would have received Superior’s service rig, coiled tubing, wireline, pressure control, flowback, fluid management and...
A&D Transactions

A&D - Market volatility contributes to recent uptick in bankruptcy sales - June 2020
Even before the oil price collapse in early March, market volatility contributed to an uptick in bankruptcies and associated Section 363 asset sales. As low oil prices hammer companies’ bottom lines, such companies as Southland Royalty, Gavilan Resources, Freedom Oil & Gas, Yuma Energy and Templar Energy have either already struck deals or launched sales processes for their assets. They are not alone. In February, EdgeMarc Energy Holdings, which went bankrupt in May 2019, sold its...
A&D Transactions

A&D - Apergy turns into ChampionX as $4.4B merger completed - June 2020
Apergy Corp. completed its $4.39 billion merger with ChampionX Holding Inc., the upstream oil and gas spinoff from Ecolab Inc. The combined company is now named ChampionX Corp., and its CHX ticker symbol replaced APY on the NYSE on June 4. Ecolab equity holders own about 62% of ChampionX, and former Apergy equity holders own 38%. The companies’ leadership stuck with the merger plan announced in December despite the downturn, arguing that the deal makes sense because their customers are...
A&D Transactions

A&D - Delek Logistics buying trucking assets in $48MM dropdown - June 2020
Delek US Holdings will drop down trucking assets based in Tyler, Texas, and El Dorado, Arkansas, to its Delek Logistics Partners subsidiary for $48 million cash, the companies announced May 18. The assets and related services, part of Delek’s refining operations, are projected to generate $8-9 million of EBITDA. Between 80% and 85% of the EBITDA guidance is supported by a minimum revenue commitment from Delek US. The trucking assets consist of nearly 150 leased tractors and 150...
A&D Transactions

A&D - Oxy reportedly mulls sale of Middle Eastern stakes to cut debt - June 2020
Occidental Petroleum is considering selling stakes in its Oman assets to help reduce its $40 billion debt load, most of which it took on last year through its $57 billion acquisition of Anadarko Petroleum, sources told Bloomberg. The value of the assts could be more than $1 billion, according to the June 8 report. The company is also open to selling stakes in its other Middle Eastern assets, located in the UAE and Qatar. Occidental, which has been active in Oman for more than three...
A&D Transactions

A&D - Conoco clinches $1.46B northern Australia sale to Santos - June 2020
ConocoPhillips completed the $1.46 billion sale of its assets in northern Australia and Timor Leste on May 27 to Australia’s Santos Ltd. The companies restructured payments so that $125 million of the originally announced $1.39 billion upfront cash will instead be due upon the recently deferred FID for the Barossa gas condensate development off Australia’s Northern Territory. That brings the total due upon FID to $200 million. Conoco said it has received net cash proceeds of $765 million in Q2,...
A&D Transactions

Get more news for A&D Transactions