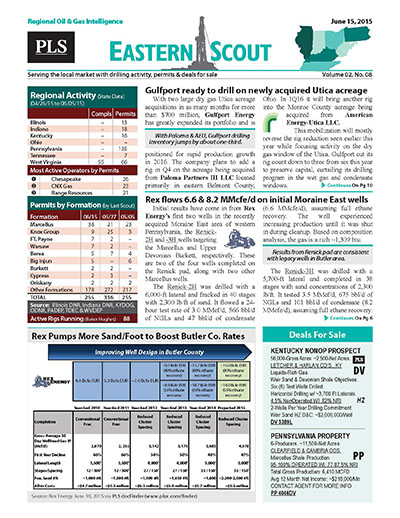 See what it is about before you buy. View a sample issue of Eastern Scout.

Opportunity is a reflection of information.
Call 713-650-1212 For More Information
Search Eastern Scout:

Headline
Publication
ES - Montage lowers capex, shifts toward Utica dry gas from Marcellus - March 31, 2020
Appalachian pure-play Montage Resources updated its 2020 operating plans in response to recent market challenges, lowering capital guidance 23% to $145-165 million from $190-210 million. Spending will be front-loaded, with 65% budgeted for H1, and 90% of the total will go to D&C with the rest directed toward land and other expenditures. Development will be concentrated in stacked-pay opportunities targeting the Marcellus and dry-gas Utica in Monroe County, Ohio. Montage plans to drill...
Eastern Scout

ES - EQT lowering 2020 capital expenditures again - March 31, 2020
Through schedule and well design optimization, EQT is able to lower its 2020 capex by $75 million while maintaining its prior production guidance, the company said March 16. Its capital budget has been lowered to $1.075-1.175 billion from the $1.15-1.25 billion guidance that was released Feb. 27. It is also $200 million lower than the preliminary 2020 capital guidance of $1.30-1.40 billion announced Oct. 31. The new plans call for running two to three tophole rigs, three to four horizontals rig...
Eastern Scout

ES - Diversified Oil & Gas Highlights - March 31, 2020
Diversified Oil & Gas extended for another five years an agreement with the Ohio Department of Natural Resources to plug up to 20 wells per year as part of an asset retirement program. The extension comes after an initial five-year commitment to plug 18 wells per year. The company owns about 7,100 wells in the...
Eastern Scout

ES - Range Resources Highlights - March 31, 2020
Range Resources revealed during a Feb. 28 conference call that it has opened a data room for its Terryville field assets in northern Louisiana, which it entered via its $4.4 billion acquisition of Memorial Resource Development in 2016. Last April, the company had said it was pursuing multiple asset sales to reduce debt. A Terryville sale would make Range an Appalachian...
Eastern Scout

ES - Regional Highlights - March 31, 2020
The EIA projects that Appalachian gas production will fall by 231 MMcf/d sequentially in April to 32.555 Bcf/d. There were 564 DUCs in Appalachia as of February, down by nine versus January.The Ohio Department of Natural Resources appointed Eric Vendel chief of the Division of Oil and Gas Resources Management. Vendel has served as the division’s lead attorney since 2012. A federal judge temporarily blocked the leasing of more than 40,000 acres for oil and gas...
Eastern Scout

ES - Southwestern slashes well costs in 2-year quest for cash flow - March 10, 2020
Southwestern Energy beat its cost reduction targets in 2019, lowering well costs 27% to $824 per lateral foot across its acreage. Setting a company record, an 18,000-ft lateral was drilled and completed for $605/ft. Self-sourcing sand, use of a company-owned water pipeline system, increased lateral lengths and reduced cycle times contributed to the reductions. Lower costs are part of the company’s two-year plan to become cash flow neutral following the divestment of its Fayetteville assets,...
Eastern Scout

ES - Regional Highlights - March 10, 2020
The EIA projects that Appalachian production will fall by 220 MMcf/d sequentially in March to 33.13 Bcf/d. There were 537 DUCs in Appalachia as of January, down by six versus...
Eastern Scout

Get more news for Eastern Scout