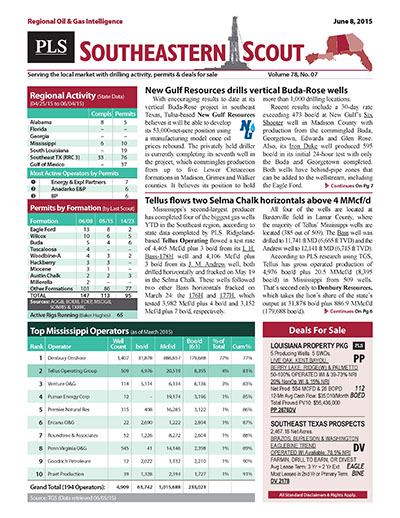 PLS publishes local exploration news and drilling insights on a regional basis through reports like the Southeastern Scout. Previously known as the Southeastern Oil Review and published since 1926, this unique report has a loyal following of explorationists, operators, drillers, landmen and landowners in South Louisiana, Mississippi, Alabama and Florida.

See what it is about before you buy. View a sample issue of Southeastern Scout.

Opportunity is a reflection of information.
Call 713-650-1212 For More Information
Search Southeastern Scout:

Headline
Publication
SES - Chevron sanctions historic $5.7B Anchor project in the GOM - December 19, 2019
Chevron sanctioned its Anchor field project in the Gulf of Mexico, the highestpressure deepwater development to date. Discovered in 2014 in the Lower Tertiary Wilcox sands, the field is located in the Green Canyon area, 140 miles off Louisiana in 5,000 ft of water, and will be developed using new technology capable of handling operating pressures up to 20,000 psi. Stage 1 will consist of a seven-well subsea development tied back to a semisubmersible floating production unit capable of...
Southeastern Scout

SES - Vess’ four-well Woodbine pad delivers company record - December 19, 2019
Vess Oil completed a four-well pad at Kurten field in Brazos County, Texas, at the beginning of November, according to state data. The wells targeted the Woodbine with effective laterals ranging 8,460-11,074 ft. Initial 24-hour rates averaged 959 boe/d (86% oil), or 98 boe/d per 1,000 lateral ft. Three of the wells rank as the highest IP24s on record for the company and are top-quartile completions for the Woodbine in Brazos County, where Hawkwood Energy and MD America Energy have also been...
Southeastern Scout

SES - W&T Offshore Highlights - December 19, 2019
W&T Offshore acquired ConocoPhillips’ operated 75% WI in Magnolia field in Garden Banks 783 and 784 for $20 million. It is gaining October net production of 2,300 boe/d (82% oil) and proved reserves of 4.1 MMboe (67% oil, 5% NGLs; 73% PDP). Besides the cash price, W&T will assume all abandonment obligations associated with the assets; as of November 2017, gross undiscounted liabilities were estimated at $35.8...
Southeastern Scout

SES - Equinor Highlights - December 19, 2019
Equinor acquired 20% WI in the Mollerussa prospect in the Walker Ridge area of the GOM from operator Repsol, which retains 40% WI. Ecopetrol holds the other 40% WI in the prospect, which lies 10 miles east of the Equinor-operated Monument prospect. The transaction is part of an asset swap in which Repsol received 20% WI in Monument from...
Southeastern Scout

SES - Shell Midstream Highlights - December 19, 2019
Shell Midstream is looking to expand the Mars oil pipeline by 65,000 bo/d due to increased demand for pipeline space. During 2019, the pipeline, which has mainline capacity of 400,000 bo/d, ran at an average capacity over...
Southeastern Scout

SES - Murphy eyes Gulf of Mexico project startups in Q4 - November 21, 2019
During Q3, Murphy Oil completed the Nearly Headless Nick well on the Gulf of Mexico’s Mississippi Canyon 387 block. The well is being tied back to the LLOG Explorationoperated Delta House facility. The company also completed a workover on the Medusa well. First oil is expected in Q4 for both wells. Murphy’s operated Dalmatian 2 well on DeSoto Canyon 4 and non-op Lucius 3 well on Keathley Canyon 875 were tied in during Q3, with Dalmatian 2 production starting before the quarter’s end at 5,400...
Southeastern Scout

SES - Kosmos Energy Highlights - November 21, 2019
Kosmos Energy filed a new exploration plan for an additional well at its Resolution prospect, which encompasses Garden Banks blocks 491, 492 and 536. The planned well, referred to as “SL 6,” is slated to be spudded on Nov. 25 and take 104 days to drill. SL 6 will have a surface location on GB491 and a bottomhole location in adjacent block GB536, ~37 meters northwest of the initial Resolution wildcat, G35919...
Southeastern Scout

SES - Shell Highlights - November 21, 2019
Shell Midstream Partners intends to expand its Mars offshore pipeline because the 163-mile pipeline from the Mississippi Canyon to Louisiana is expected to reach capacity. The partnership announced a solicitation of interest, offering priority service on the new incremental capacity for Mars. The company expects the new volumes from fields such as Vito, PowerNap and other nearby...
Southeastern Scout

Get more news for Southeastern Scout