Serving the E&P market with news, analysis and business opportunities. 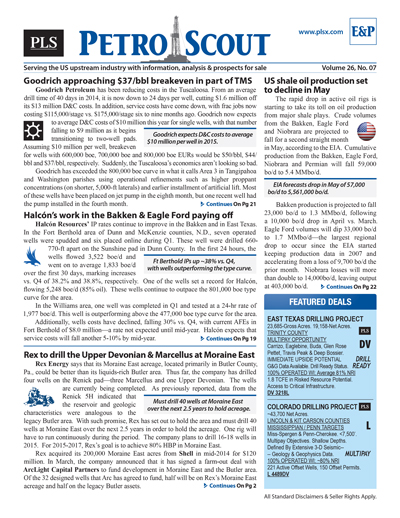 See what it is about before you buy. View a sample issue of PetroScout.

Need more information? Click the button to recieve more details about the PetroScout

Opportunity is a reflection of information.
Call 713-650-1212 For More Information
Search PetroScout:

Headline
Publication
PS - Permian Basin pure-plays get serious about activity cuts - March 2020
The economic implications of the coronavirus pandemic and the oil price war between Saudi Arabia and Russia have sent oil markets on a downward spiral. WTI front-month contract prices are down more than 50% since the end of February. Shale operators across the US have acted swiftly to adjust 2020 plans and protect balance sheets. Operators in the Permian Basin have announced a combined $13.8 billion in reductions to their overall capex budgets and cuts to rig activity. Operators plan to cut at...
PetroScout

PS - CHK loses Turner locations, expects to add Frontier - March 2020
During 2019, Chesapeake Energy brought online 72 wells in the Powder River Basin. The appraisal process resulted in some interesting conclusions about well spacing. While its peers are looking at developing the Turner at four wells per section, Chesapeake had been more conservative at two to three. But on its Feb. 26 earnings call, exploration and production EVP Frank Patterson ruled out development of more than two Turner wells per section on the company’s acreage and suggested that even one...
PetroScout

PS - Oxy gives 2020 capex a nearly 50% haircut on price collapse - March 2020
In response to the downtick in crude oil prices, Occidental Petroleum announced a drastic reduction in capital spending for 2020. Capex has been lowered to $2.7-2.9 billion from $5.2-5.4 billion. The company initially announced March 10 that capex would be cut to $3.5-3.7 billion but revised that lower March 25. The latest announcement included another $600 million in operating and corporate cost reductions. Oxy also cut its dividend for the first time in 30 years, slashing it to $0.11/share...
PetroScout

PS - Ring halts drilling operations, explores capital budget revision - March 2020
Ring Energy has adjusted its 2020 plans because of the recent drop in commodity prices. The company will not drill any wells until prices stabilize. Ring drilled four wells on the Northwest Shelf in Q1 but will not proceed with the 14 other wells planned for the year. The company has no contractual obligations for D&C work. In order to maintain production, Ring will make necessary investments in infrastructure. Ring’s all-in cost for a barrel of oil is $25. The company is exploring cost...
PetroScout

PS - Ovintiv makes a two-thirds reduction in operated rig activity - March 2020
On March 12, Ovintiv announced that it would immediately drop 10 rigs and would cut an additional six in May. Following the reductions, the company will be operating three in the Permian Basin, two in the Anadarko Basin and two in Canada’s Montney play. The rig cuts will help to reduce Q2 spending by $300 million and full-year cash costs by $100 million. Ovintiv had anticipated spending $2.7 billion and generating free cash flow for a third consecutive year. The company is prepared to...
PetroScout

PS - If you’re not cutting, you’re not trying as WTI falls into $20s - March 2020
Since the end of February, the WTI front-month contract has fallen around 50% as the coronavirus pandemic leaves a trail of economic devastation across the globe. For the first time since 2009, the International Energy Agency projects global oil demand will fall YOY in 2020, dropping by 90,000 bo/d this year, according to the agency’s March oil market report. At the same time, Saudi Arabia and Russia are going head-to-head in a battle for market share, slashing prices and ramping oil...
PetroScout

PS - Callon gives reduced outlook for 2020-2021 with free cash flow - March 2020
Given the macroeconomic outlook, Callon Petroleum is reducing its full-year 2020 capital budget to $700-725 million from $975 million to prioritize financial flexibility and free cash flow. The company’s active rig count will be reduced from nine currently to five by the end of Q2. Frac crews will be cut to two from five in the same time frame. The outlook foresees three to four drilling rigs, with two to three in the Permian and one in the Eagle Ford, and one to two frac crews in 2H20 and...
PetroScout

PS - Permian Briefs - March 30, 2020
Centennial Resource Development shifted from a five-rig program at the end of February to one rig currently. Previously, the company had planned to go to a four-rig program in April through year’s end. The reduction to one rig will lower planned capex by 50% to around $320 million if that one rig is held constant through year’s end. Additionally, the company has entered into fixed-price oil swaps for April through September to protect against possible additional near-term declines in oil...
PetroScout

Get more news for PetroScout