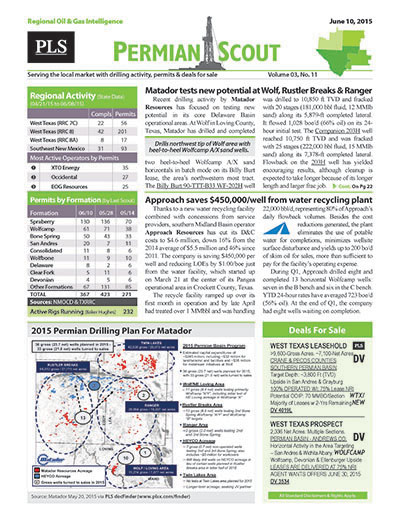 See what it is about before you buy. View a sample issue of Permian Scout.

Opportunity is a reflection of information.
Call 713-650-1212 For More Information
Search Permian Scout:

Headline
Publication
PS - Permian operators slash 2020 plans as oil market craters - March 18, 2020
The economic implications of the novel coronavirus and the oil price war initiated between Saudi Arabia and Russia have sent oil markets on a downward spiral. WTI settled at $20.37/bbl on March 18, dropping 24% on the day and 56% in the last two weeks. Shale operators across the US have acted swiftly to adjust 2020 plans and protect balance sheets. In the Permian, everyone is cutting back. Parsley Energy revised its baseline capex assumption from $50/bbl WTI to $30- $35/bbl for the...
Permian Scout

PS - Oxy drastically improves operations on Anadarko acreage - March 4, 2020
On the Texas Delaware Basin acreage it acquired as part of its purchase of Anadarko Petroleum last year, Occidental Petroleum is recovering more barrels per section with fewer wells and lowering costs utilizing its proprietary development approach. The Anadarko method used a higher density of wells with landing zones in the Wolfcamp X, Y and A. Oxy’s method uses 14% fewer wells per section and targets the Third Bone Spring, Wolfcamp Y and Wolfcamp A. Recovery is estimated to be 7% higher....
Permian Scout

PS - Centennial Resource Highlights - March 4, 2020
Centennial Resource announced the sale of its southern Delaware Basin water infrastructure assets in Reeves County, Texas, to WaterBridge Resources. Upon closing, expected in late Q1, Centennial will enter a longterm water services agreement with WaterBridge to handle the disposal of its southern Delaware Basin water that is not currently subject to existing dedications. Centennial will get $150 million cash at closing, part of which it will use to repay existing borrowings under its credit...
Permian Scout

PS - Noble drastically improves Delaware operations and economics - February 19, 2020
Noble Energy made notable improvements in cost structure and well productivity on its Delaware Basin acreage in 2019. Q4 well costs continued to decrease, with savings of more than $3 million per well, normalizing to 7,500-ft laterals, compared to 4Q18. During the same period, LOEs per boe saw a 31% decrease. Contributing to the falling costs was a boost in efficiencies. Q4 drilling times averaged 15 days for 8,430-ft laterals, which is more than a 45% improvement compared to 1Q19. Completion...
Permian Scout

Get more news for Permian Scout